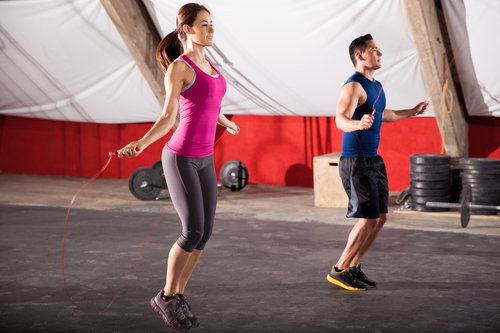 A new and exciting technique for losing weight and burning belly fat is called burst training. People have been trying and failing with various exercises to lose weight for many years now. Now science is getting more involved, and the research being done is making it easier to understand how and why burst training exercises work better.

This article will discuss what burst training is, why burst training works, and the specific exercises that can be done to achieve a fitter, slimmer and overall healthier body.

What is Burst Training?
Burst training is very simple, very effective, very fast, and very cheap! There is no need for expensive gym memberships or personal trainers and it can take just 15 to 30 minutes per day, 3 days a week.

Burst training is also called High-Intensity Interval Training, or HIIT. This means that the person will do an intense workout at 90-100% of their maximum heart rate for 30 to 60 seconds, followed by a rest period of 30-90 seconds. This action is repeated approximately 10 times, or however long the person can endure the intensity.

This type of intense exercise means that you will only need to do 15 to 30 minutes per day, for 3 days a week, compared to hours worth of endurance exercises; such as the treadmill or the elliptical machine. Burst training is only needed 3 days per week because of its high intensity, and as such, a day of rest in between workouts is essential for optimum recovery.

Why Burst Training Works
Most people like to go to the gym and run on the treadmill, use the elliptical machine or pedal on the stationary bicycle. While these actions do burn calories and will cut some fat, they will take up a lot of your time and may not be as effective for weight loss as you would hope.

Here is the science behind why burst training works:

Burst Exercises
The idea behind the burst exercise program is that people will do an intense workout for 30 to 60 seconds followed by 30 to 90 seconds of rest, repeated 10 times in a row. These exercises should be repeated 3 times a week, with a day of rest in between to allow the body to recover.

Another great aspect of burst exercises is that you can change them up or repeat the same ones, so you can tailor the workout to your preferences. This being said, for maximum efficiency, try to incorporate as many variations of exercises as you feel you are able to.

Some of the best burst training exercises include:

As scientific research on fitness gets better and better, ideas like burst training will not only present themselves, but evolve to make exercise more efficient for the body.

People no longer have to spend an hour or two prodding along on a treadmill for 10 hours a week to get in shape. Scientists are quickly realizing that the burst training is one of the most effective and efficient methods to lose weight, as well as one of the most cost effective.